The discussion of wind failures in PV projects, especially those built with first-generation single-axis trackers, is becoming more and more intense after the rapid growth of this market.

In engineering constructions, the risk that accompanies every scale-up of a construction is known, and this was unfortunately verified in practice. First-generation single-axis trackers behaved well while being small in size, so manufacturers scaled them up, only to discover the painfully that other parameters also affected their performance.

Aeroelastic phenomena, i.e. the application of forces from the air (aero) to an inherently elastic, metallic structure (elastic), is not something new to civil engineers or aeronautical engineers. Despite all this, aeroelastic phenomena are often not taken into account in engineering applications due to their negligible effect. This was also the reason that aeroelastic effects were ignored in the first designs of uniaxial trackers, with the result that several of them were so sensitive to twisting of the central axis that they were destroyed by tuning for air values ​​far below those given by the manufacturer as a safe operating limit . In particular at a certain critical airspeed, incident at a certain angle, the tracker developed negative damping instead of positive resulting in tuning and eventually failure

After some dramatic failures, it became apparent that compliance with codes and design standards is not enough to avoid them. Wind tunnel testing of all uniaxial trackers is necessary to be sure of the results. And in fact tests of many rows of trackers (multi row test) and not only xn--kxae5a4a. A tracker that has not been tested in a wind tunnel is just an accident that we wait to happen (unless we have consciously over-dimensioned it, with the corresponding price in cost and the LCOE of the project).

It was normal after the above problems and the results from the wind tunnels that the uniaxial trackers evolve and move to a new generation.

Knowing that the transition from a 1 Portrait to a 2 Portrait arrangement is not linear in terms of wind pressures, but exponential, the manufacturers were led to the idea of ​​shrinking the trackers again by adopting the 1P arrangement, only this time with one motor driving 2 rows of trackers .

The dual row trackers, as they were called, were first presented by the Spanish company STI Norland, and are already in the 6th generation of development and combine the advantages of both devices, since:

· they have a 1P arrangement, with the corresponding safety against failures, since they have a 2-meter long truss while

· one motor drives 2 rows of trackers, through articulated arms, with a corresponding reduction in costs

4. they adapt more easily to altitude differences in the field

But the fact remains that the tracker, no matter how well designed and of good quality it is, is still a mechanical construction with moving parts and electronic systems. And even parts and systems installed outdoors, exposed to weather conditions and with a requirement to function for 20 years. This means that constant monitoring, preventive maintenance and interventions for repairs are required.
It should be noted that a failure (e.g. stopping the tracker) does not only cost its acquisition (spare parts and labor) but also the loss of performance, since the tracker does not follow the sun. All these are factors that must be taken into account during project planning and calculated in the reduced cost of energy produced (L.C.O.E.). And this is the reason where it is generally not recommended to install trackers in projects smaller than 5 MW on a single plot. In such projects the maximum L.C.O.E. we get it by installing bifacial panels and fixed bases specific for bifacial panels (eg ELVAN BIF-2V).

The correct study of the project

But even for a well designed single row tracker and tested in the wind tunnel, such as e.g. the Norland STI-H250, proper study before installation plays a primary role.

This happens because the wind load given by the Eurocodes does not tell the whole truth. What comes into play is the design wind pressure, which also depends on:

1. the terrain on which the tracker will be installed (e.g. for category 1 terrain – very soft – the design wind pressure is 1.82 times greater than the wind pressure given by the Eurocodes)

2. local weather phenomena that should be studied

3. local soil irregularities such as e.g. the existence of ravines (so the design wind pressure is 1.6 times greater than the wind pressure given by the Eurocodes)

For all these reasons STI Norland has tested and certified in the wind tunnel almost 1000 prototypes covering all possible combinations:

· different angles of incidence of the wind

The challenges of the future

Of course, technological development never stops and always presents us with new challenges. Some of the issues we will have to deal with in the future are:

· the increasing use of bifacial panels. Here the dual row trackers have an advantage over the single row since for the maximum exploitation of the back surface of the panel the reduced height of the tracker (normalized height) must be constant. This means that a dual row tracker needs less height to have the same performance as a single row tracker, when we have put bifacial panels. And of course a lower height means lower wind pressures, etc.

· the appearance and more widespread use of increasingly larger panels, both in power and dimensions. Because with increasing surface area wind pressures increase exponentially, this is a major challenge for the design of trackers. This is where single row trackers have an advantage because of the 1P arrangement which means the purlin remains reasonably sized.

· the more frequent occurrence of increasingly extreme weather events, due to climate change.

From all the above we conclude that:

· the occurrence of failures in the first generation uniaxial trackers, led to the appearance of dual row trackers which: have a 1P arrangement and a 2m long beam. while a motor drives 2 series of trackers. These are now the new market standard.

· A tracker that hasn’t been wind tunnel tested is just an accident waiting to happen (unless we’ve consciously over-sized it, with a corresponding cost and LCOE cost to the project)

· Dual row trackers can best face the challenges of the future: the increasing use of bifacial panels, the more widespread use of larger and larger panels as well as the more frequent occurrence of more and more extreme weather events due to climate change

· Installation of trackers makes sense only for projects above 5 MW, in a single field. 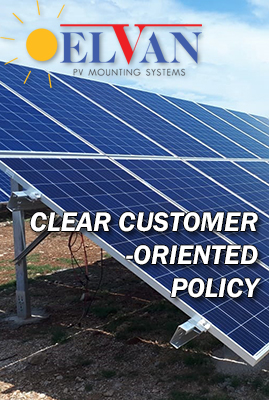 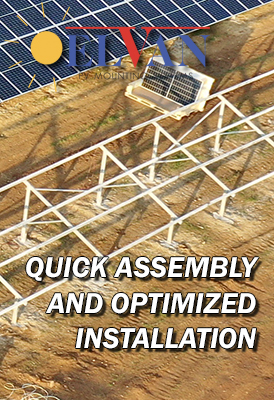